I'd Rather Be Stripping Dog Grooming Webinar

What was once almost a dying art, hand stripping has made quite a comeback in the past few years gaining increased interest in grooming salons around the country. If you want to learn how to hand strip, or continue to refine your skills as a hand stripper this is the webinar for you. Hand strip specialist Grazia “Grace” Adriani NCMG teaches the art and science of hand stripping on a Lakeland Terrier. She demonstrates the proper technique and goes over all aspects of stripping for show, contest, ring, and everyday salon trims from a business owner perspective. Most importantly- she shows how to save your hands with the proper form and tool usage.

**Grace also did the I’d Rather Be Stripping webinar completely in Spanish! If Spanish is your first language, and you prefer to enjoy the Spanish version of this webinar, click here. 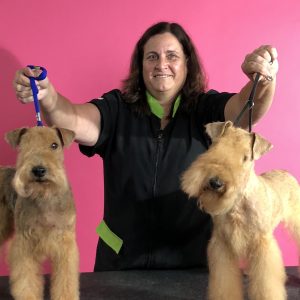 Grazia “Grace” Adriani is a Nationally Certified Master Groomer with NDGAA, a Certified Groomer with IPG, and a Certified Feline Master Groomer with NCGIA. She graduated from Merryfield School of Pet Grooming in 2015 and has apprenticed under Irina Pinkusevich and Michael Lamb. Wanting to learn more, she worked with Teraz Kennels polishing her skills & expertise on Lakeland Terriers. Once she experienced dog shows, she was hooked. She has shown several dogs including her very own champion: CH Teraz Bringing Sexy Back, Justin.

Grace enjoys competitive grooming and has won multiple placements in her Division including Best Groomed Dog & Best In Show with her Lakeland Terrier, Dunkin. In 2019 and 2020 she was nominated for Barkleigh Honors Up & Coming Groomer/Competitor of The Year and won that title in 2020. Grace was also part of the Zolitta team that won the Groom Bowl Amateur Championship at the Atlanta Pet Fair in 2021 and also was awarded with the 2021 Peggy Harris Kindness Award at the NCGAA Fun In The Sun Grooming Show.

Currently, Grace owns a well respected salon in Miami Beach, the Miami Beach Pet Spa and also works as an instructor at Merryfield School of Pet Grooming. She is owned by her Standard Poodle, Penny; her Mini Poodle, Zoe; her Kerry Blue, Kona; and her Lakie, V.

4 reviews for I’d Rather Be Stripping Dog Grooming Webinar