Learn how to properly, safely, and effectively lift stains and colors from a dog’s coat. From tear and urine stains to dark or dyed hair, award-winning master groomer Lindsey Dicken, NCMG will show you all her tips and tricks to get the best results possible to lift unwanted color. Stain or color lifting safely is something every dog groomer should know!

NOTE: This is a replay of a live webinar experience. Discounts mentioned may no longer be available. Once purchased, the webinar replay will be available in your account for life. If you plan to utilize these stain lifting techniques at your salon, please be sure the pet parents are aware of the process and have signed a proper release form waiver. 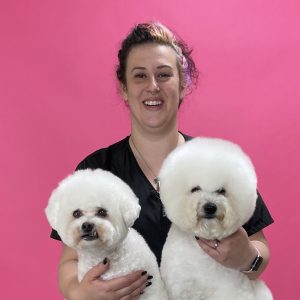 Master Groomer Lindsey Dicken has been grooming for 15 years, and has been grooming competitively for 13 of those. As one of the most decorated groomers in competitive grooming history, Lindsey has won multiple Best All Around Groomer awards and Best in Show at nearly every show in the US, Best Scissored Poodle awards, World Champion Poodle Groomer, and Intergroom’s Groomer of the Year a record 5 times. In 2013, Lindsey was awarded Groomer of the Year at the prestigious Westminster Kennel Club.

Lindsey has qualified for Groom Team USA’s Top Ten Stylists every year she was eligible, reaching #6 position her very first year. She has been the #1 ranked groomer in the nation for 10 of the past 12 years, and has had the honor of representing the USA at the World Team Grooming Championship 5 consecutive times helping win three gold and two silver medals with multiple breeds internationally.

Lindsey is most known for her work on Bichon Frises and Poodles, however she has earned wins on nearly every breed allowable. In addition to competing in grooming contests, Lindsey breeds and shows champion Bichon Frises and miniature poodles, her Percheron draft horses, and is a highly sought after speaker helping groomers around the world hone their skills.

2 reviews for Shine Bright Like a Diamond Dog Grooming Webinar